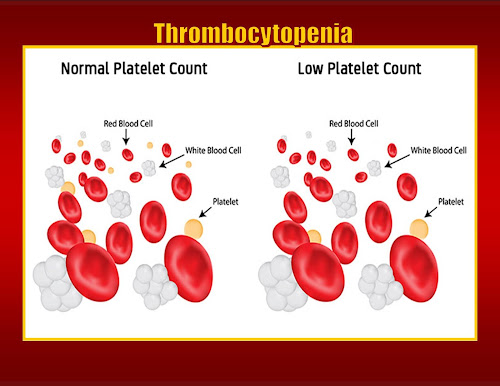 Thrombocytopenia is low platelet counts. Platelets are a type of blood cell that is colorless and its job is to help your red and white blood cells clot. When you have a clotting disorder, it can lead to other conditions like bleeding gums, bleeding eyes, bleeding bladder, and also bleeding that won’t stop.
There are many causes for this condition such as infections, medicines and medical conditions.
For most people whose counts are just under the recommended levels, it may not be much of a problem and a simple fix.
However; the problem lies in the body’s immune system. Your antibodies that is suppose to attack disease and infection begins to attack your platelets causing them to lower your counts.
If your levels are above or below the norm, Don’t let it go… Some things are simple to fix before they get out of control.